8. The organization of teaching and learning into courses, classes, schools, colleges, and universities are for matters only of logistical convenience and the allocation of scarce communal (e.g., public) resources. The individual teacher-learner connection remains the essence of education in spite of the appearance of collective activity. 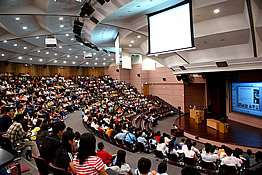 This will seem like nonsense to many, but students are aggregated into classes and treated en masse because there is no way around it for the bulk of the schooling that takes place in the modern world. In the best of all possible worlds, there would be one teacher for each learner, or at least each teacher would, at any given moment, work exclusively with a single learner. The great bulk of what is called “teaching method” or “praxis” in university departments of education would then be unnecessary. Gone would be the problems of “behavior management” and of “diversity”–the fact that a single classroom necessarily contains students of varying socio-economic, racial, and family backgrounds, and students of varying talents or challenges. They all have to treated as a group, as a collective, and special training is understandible needed to deal with it.

On its face, this would seem like a problem of industrial production–how to mass produce education. The problems of mass education, though, are greater than those of the mass production of manufactured goods. Factory managers have nearly full control over the raw materials they allow in to their processes. They can demand uniformity and “quality control” of their suppliers. The same control is not possible in mass education. The “raw material”–the students–come as they are, and the only way of coming close to the uniformity of their characteristics would be to sort them into defined groups and then to treat each group differently. Naturally, this is neither possible politically nor could it ever been executed within modern understandings of social justice.

If classes and other institutional methods of learner grouping are unavoidable, what do I mean when I say that the individual teacher-learner connection remains the essence of education? To my mind, I means the following:

a) The teacher must acquire and maintain some sense of his students’ characteristics as individuals. To whatever extent is possible, he must treat them as individuals and not merely as a member of a group.

c) “Fairness,” as it is generally understood in democratic societies (and almost obsessively by Americans), usually is taken to mean that everyone is to be treated identically and that differences are to be ignored. To be “fair” is generally understood to be “difference-blind” and to deal with everyone with machine-like uniformity. I have no quibbles with these definitions, but I avoid the use of the term altogether in favor of a value I consider superior: “justice.” Justice means everyone gets what he deserves, that he gets “what’s coming to him.”

I have seen it happen that a student struggling with a difficult subject can become discouraged by a string of poor grades. To give such a student another poor but “fair” grade might cause him to give up and abandon the study (or all his studies and just “drop out”). To give him a somewhat better grade than is “fair,” though, might help preserve in him some hope. One may ask, “but why is he struggling? Can’t he just apply himself?” The answer is, “yes, he can and he has, but it’s harder for him than for others.” Why harder? For a thousand and one reasons, none of which are the business of other members of a particular “class,” but are the business of a teacher as he dutifully helps each of his students learn.

[Here is the original article, “My Philosophy of Teaching” (opens in new window).  For all the articles in this series, click on the Teaching Philosophy link below or under Categories to the right.]